Three Miami Business School sophomores will have the chance to win $1 million for their startup idea, Warrior Fitness, after winning a campus Hult Prize competition Nov. 27.

Olivia Dubi, Ryan Rebholz and Kevin Wheeler comprised one of 17 teams that competed. Their winning idea: establish a chain of fitness and training centers where young, unemployed veterans can put their physical training and leadership experience to use.

Not only will the Warrior Fitness plan give veterans jobs—it will give them a chance to gain valuable business management education, too, says the group.

“Everyone likes to say they support our veterans and our troops,” said Rebholz, an international finance and marketing major, “but veterans still have some of the highest rates of unemployment in the nation. We wanted to find a way to change that.”

“It really isn’t fair how people who dedicate their lives to serving our country come back to limited opportunities,” she said.

During the competition, teams were each given 10 minutes to present their idea for a startup that could create 10,000 jobs for young workers in 10 years. The top three teams competed in a final round judged by business experts, including University of Miami faculty and alumni. 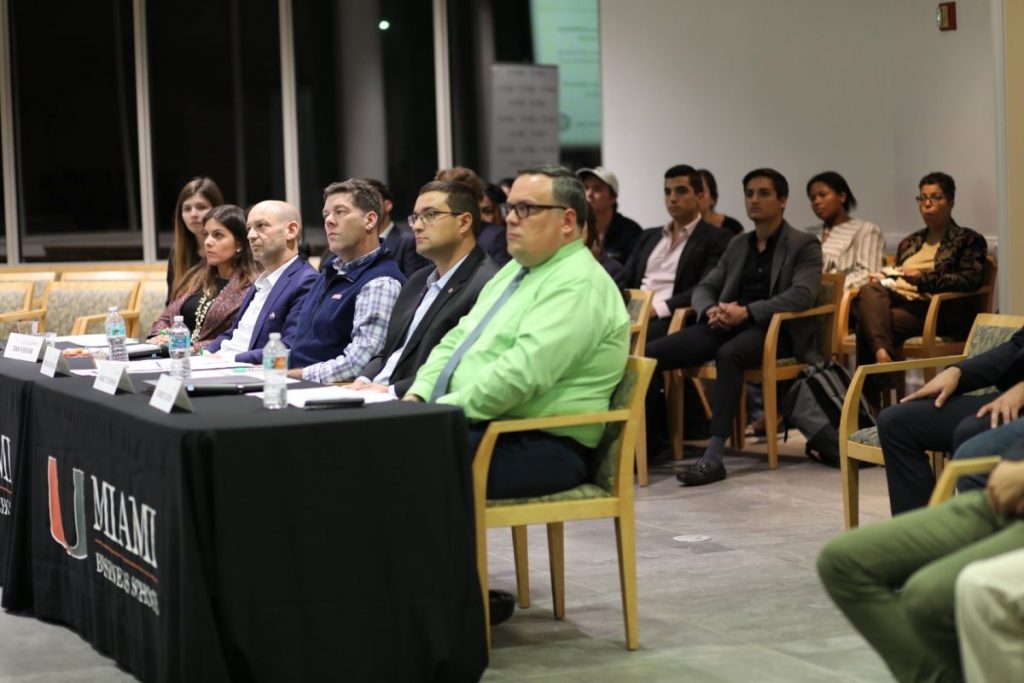 “We believed in our idea, but getting that confirmation from the judges felt really good,” Rebholz said. “At this point it still seems unreal. We understand we still have a lot of work to do before we take our idea and compete against other universities, but we’re excited nonetheless.”

After winning the on-campus event, the group will be able to compete in a regional competition in spring. If they are successful there, they will have the opportunity participate in a six-week accelerator program, followed by the final competition held at the United Nations in September, where the $1 million-winning team will be decided.

“We are all super excited and proud to have made it to the next round,” Dubi said. “We plan to work on our project until it is the absolute best it can be in order to best represent UM.”

Though the next legs of the competition will take place beyond Coral Gables, hosting the event at UM was a success in and of itself for Hult’s Miami campus director, Kyle Kingma.

Kingma, a senior majoring in finance and economics, worked to bring the contest to campus with the help of the Hyperion Council, for which he serves as president. The organization creates solutions for local and international businesses and nonprofits.

After an interview and application process with the Hult Prize, as well as work in branding the competition and preparing it for a UM debut, Kingma and the Council were able to bring the event to campus.

“It was so great seeing it come together and getting the number of teams to be an official event,” Kingma said.

“Thousands of students from around the globe participate in the Hult Prize,” he said. “It’s great to see UM students answer the Hult Prize’s call for social entrepreneurship.”

The Hult Prize, which turns 10 next year, began at the Hult International Business School and places an emphasis on the social impact of business—an “intersection of purpose and profit,” according to HultPrize.org. This year’s anniversary challenge is named “For Us, By Us,” placing a special focus on youth employment.