Hundreds of Indians barraged her with abuse on Twitter, telling her to stay out of their country’s affairs. Harris — who is the niece of US Vice President Kamala Harris and is also of Indian descent — rejected the idea that the 18 million people who make up the Indian diaspora had no place in expressing opinions on the country. In the US alone, 4.8 million people are either Indian migrantsor report Indian heritage. “Don’t tell me to stay out of your affairs,” Harris wrote earlier this month on Twitter.

“These are all of our issues.”Harris also tweeted a photo of counter-protesters setting her image ablaze. “Weird to see a photo of yourself burned by an extremist mob but imagine what they would do if we lived in India,” she wrote.

Crowds burn portraits of Meena Harris, niece of US Vice President Kamala Harris (right image), and Greta Thunberg in New Delhi, India, on February 4.Tens of thousands of Indian farmers have been protesting in and around the capital, New Delhi, over new rules and regulations that they say could impoverish them. The government has responded with internet shutdowns in some areas, while security forces have arrested protesters and tried to block demonstrations.

The protests have exposed a gulf between the nationalist sentiment cultivated by the administration of Prime Minister Narendra Modi at home and the deeply felt concern among some of those of Indian heritage elsewhere. And at the heart of this war of words lies the complex question of who can legitimately claim to be Indian and who has the right to challenge perceived injustices in the country.

Harris is joined by a plethora of other celebrities of Indian descent in her condemnations of Modi’s government and India’s security forces. Several Indian-Canadians — including the politician Jagmeet Singh, the poet Rupi Kaur and the comedian Lilly Singh — have voiced their support for the farmers, as has the Indian-British singer Jay Sean and Indian-American comedian Hasan Minhaj.Like Harris, many of these Indians abroad are being put in the basket of Western celebrities who are also stoking anger in India. Singer Rihanna and climate activist Greta Thunberg put a global spotlight on the farmers’ movement when they tweeted a CNN story on the issue to their millions of followers.

Mia Khalifa, a Lebanese-American former celebrity and former adult film star, has also been vocally supportive of the farmers. Images of all three were burned alongside that of Harris on a four-headed effigy. 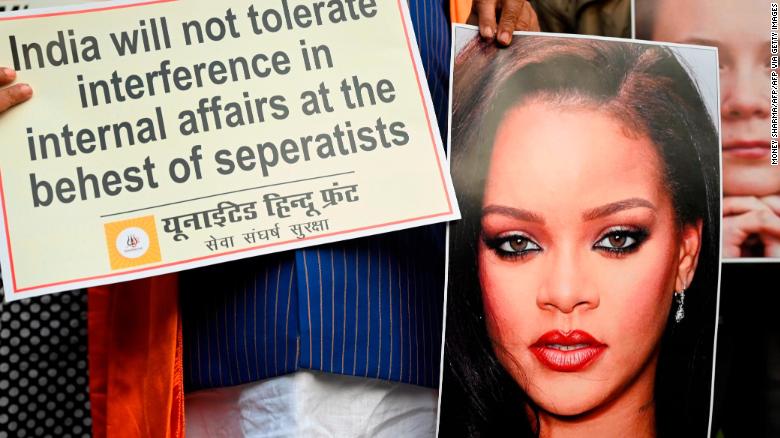 Members of the nationalist United Hindu Front hold an image of singer Rihanna during a demonstration in New Delhi on February 4.Soon after Rihanna and Thunberg’s remarks, Indian cricketing legend Sachin Tendulkar tweeted: “India’s sovereignty cannot be compromised,” adding, “External forces can be spectators but not participants. Indians know India and should decide for India. Let’s remain united as a nation.” Bollywood actor Akshay Kumar weighed in too, writing: “Let’s support an amicable resolution, rather than paying attention to anyone creating differences,” using the hashtag “India Together.”

The farmers’ protests began in response to a government plan to reverse a decades-old practice to guarantee prices to farmers for certain crops. Farmers fear that the new rules will also make it easier for corporations to exploit agricultural workers and help big companies drive down prices. 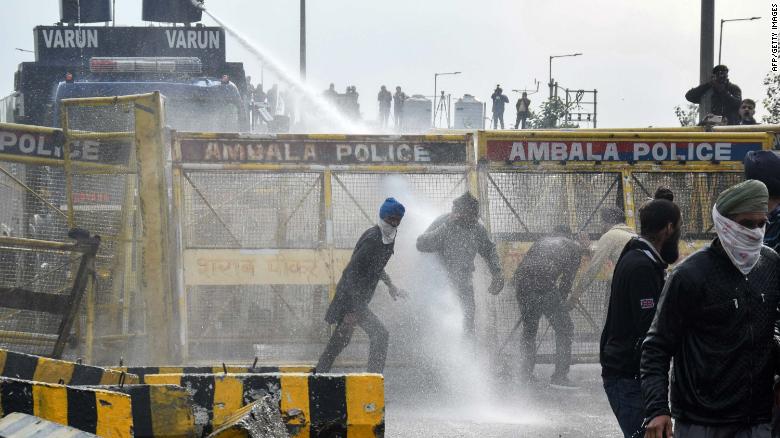 Police block a road and use a water cannon to disperse farmers marching to India’s capital, New Delhi, on the outskirts of Ambala on November 26, 2020.But the protests have widened and sparked debates about a growing sense of authoritarianism under Modi’s rule, as well as the right to protest and the treatment of Sikhs.

Modi remains enormously popular in India, following a landslide victory in 2019’s presidential election.Modi has pledged to continue with the reforms, saying that they are necessary in modernizing the agricultural sector. His critics accuse his administration of stifling dissent in its response to the protests. Security forces have erected fences to prevent protests from taking place, and have fired tear gas and water cannon to prevent farmers from outside New Delhi from entering the city. The government shut down the internet in several districts of Haryana, which borders New Delhi, in late January. And among those arrested was 22-year-old climate activist, Disha Ravi, for sharing a protest “toolkit,” a document, made publicly available on an encrypted sharing site, providing a list of ways supporters can help the protesters. The document was later shared online by Thunberg. Ravi has since been released on bail.

In contrast, those supporting the protests from abroad are able to speak out without fear of direct punishment. But there is still opposition. “There are some Western influencers who are of Indian descent but living abroad and they don’t belong to India,” said Poonam Joshi, the founder of diaspora group Indian Ladies UK, which has 31,000 members. Several members from the group met Modi when he visited the UK in 2015, but Joshi stresses that she and the group are politically neutral.

Joshi has lived outside of India for decades but remains a citizen, and she believes strongly that India should be left to its own devices. “Indians living abroad should just focus on betterment of India and its people,” she said. “Have the faith that whatever is being done is being done for the good of the people. If it doesn’t work, you can always raise a point,” she said.

From left: Poet Rupi Kaur, author Meena Harris, comedian Lilly Singh, and NDP leader Jagmeet SinghNevertheless, the issue has struck a chord in the UK, as well as the US and Canada, all of which are home to substantial Indian communities.

In Oakland, California, thousands of Indian Americans from across the state and some from beyond took part in a car rally protest in December last year to show solidarity with the farmers.

Many of the US protesters were themselves farmers, sitting atop their tractors during the rally, as many in India have also done during demonstrations.”People drove from Los Angeles and Seattle, and from across the Central Valley,” said Naindeep Singh, a leader from California’s Jakara Movement, which works to empower Punjabi Sikhs. Singh helped organize the protest. 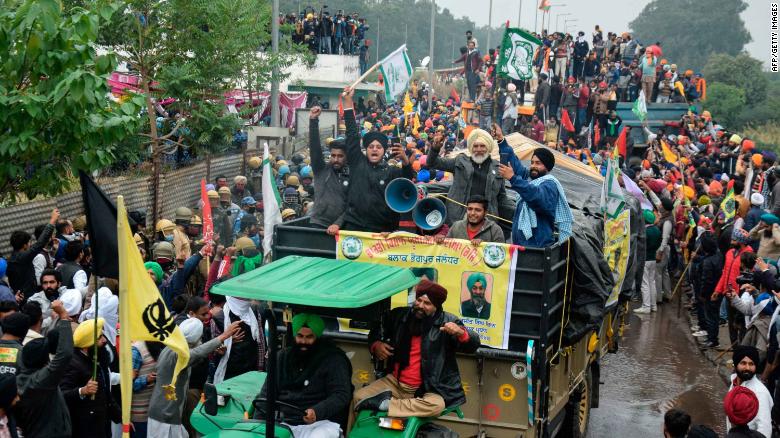 Farmers march to India’s capital New Delhi to protest against the central government’s recent agricultural reforms, in Ambala on November 26, 2020.The farmers protesting in India are predominantly Punjabi Sikhs, a community that itself has a large diaspora.

The US is home to around 200,000 Punjabi Sikhs, according to the Pew Research Center. “More and more people from across the globe are seeing that beyond the yoga, chai lattes, and Bollywood, the true face of the India is … a culture of state impunity,” Singh added.There are also solidarity protests in Canada and the UK. Some 500,000 people identify as Sikh in the UK, while in Canada, around the same number said Punjabi was their first language in a 2016 census.

Praneet Soni, who moved from India to Canada five years ago, told CNN that she was inspired to protest after watching how the Indian government treated farmers.”It’s changed — this is not just about farming,” she told CNN. “This is about human rights violations as well. Whatever your opinion on the farm laws, you can have a healthy discussion. But then when a government of a democratic country takes steps that are unjust, it doesn’t go well.” In the UK, protests in solidarity with the farmers have been held in London, the Midlands and at the University of Oxford, while community members have lobbied their members of parliament to press the government on pressuring Modi.

“Many British Punjabis have strong links to the land,” said British Labour Party MP Tanmanjeet Singh Dhesi, who is himself of Punjabi descent.”My parents were involved in agriculture and my grandparents were too,” Dhesi said. “Whenever I go back, I go to the ancestral farm. Many of my friends and family are involved in the protests directly.”Dhesi has written two letters on the matter, one to UK Foreign Secretary Dominic Raab and another to British Prime Minister Boris Johnson, urging the leader to raise the matter with Modi. “Please confirm that you will definitely convey to the Indian Prime Minister the heartfelt anxieties of our constituents,” Dhesi wrote in his letter to Johnson.

It was signed by more than 100 MPs and members of the UK House of Lords, most of whom have no direct link to India.Dhesi said that he cherished the right to speak out about human rights in countries across the world.”Human rights are universal … The right to peaceful protest is a fundamental human right. The argument [that citizens of other countries should stay out of India’s affairs] doesn’t hold water because people in India talk about foreign affairs. And we in the UK talk about foreign affairs too.”