Russia is becoming a major provider of Covid-19 vaccines to Latin America, a move that could have long-standing consequences in shaping the post-pandemic world and further dent US prestige in the region.While Moscow faces protests at home and condemnation over human rights issues from the US, France, UK, Canada and other Western countries, those issues have had little resonance in Latin America, where the recent publication of a positive peer-reviewed assessment of the Russian Sputnik V vaccine in The Lancet, Britain’s leading medical journal, was widely celebrated.Eduardo Valdes, a former diplomat and member of government coalition Frente de Todos, who now serves as chair of the Foreign Affairs Committee in Argentina’s Chamber of Deputies, says there’s a clear line between vaccine negotiations and external factors. “Now is not the time to do ideology. Our goal is for the Western Hemisphere to get its vaccines and not to poke into someone else’s internal affairs,” he told CNN. 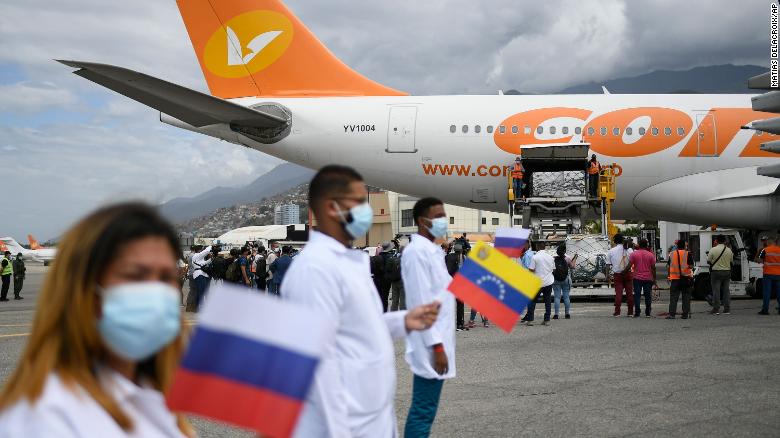 Turning to Moscow for help

Though historically seen as Washington’s geopolitical “backyard,” Latin America is increasingly turning to Moscow for help dealing with the pandemic. Six countries across the region — Argentina, Bolivia, Mexico, Nicaragua, Paraguay, and Venezuela — have now authorized use of the Sputnik V vaccine. Others are considering authorization requests, ever more urgent given the global shortage of available vaccines.Colombia’s case is an example: America’s closest regional ally, Bogotá is now poised to authorize Sputnik V as well — a decision that surprised many due to the close alignment between some sectors of the government coalition and the US Republican Party. In the past, right-wing members of Duque’s own party, Centro Democrático, openly criticized Putin’s involvement in Latin America.But when the country found itself without vaccines in hand at the end of January, Duque seems to have decided to push ideology to the side. The day after The Lancet’s publication on the Sputnik V, Colombia announced it was entering negotiations with Russia.Less than three months prior, Bogotá had expelled two Russian officials in unclear circumstances. But the expulsion “did not influence the negotiations to bring here the vaccine,” Leonid Sboiko, first secretary at the Russian Embassy in Bogotá, told CNN. The Colombian Health Ministry declined to comment on the status of negotiations.If anything, the vaccine deal could be a step toward smoothing things over. “Both countries want to turn the page. It was regrettable, but we want to move on,” Sboiko said, adding, “Cooperating on the vaccines is the most pressing issue right now, and is going to positively influence [Colombia and Russia’s] bilateral relationships.”Sboiko told CNN that the Russian Direct Investment Fund (RDIF) which handles Sputnik V’s commercialization, last week presented an emergency authorization request to the Colombian medical agency INVIMA, and it is ready to deliver 100,000 doses within 14 days after a purchase.”I think they had to bite the bullet and buy the vaccine regardless to whom they bought it from. And the Russians acted with enormous pragmatism,” Juan Carlos Ruiz, professor of Foreign Relationships at Bogotá’s Universidad del Rosario, told CNN.Colombia will begin vaccinations this week, after receiving 50,000 doses as first shipment from Pfizer.

The need to secure more vaccines is urgently felt in the region. Latin American countries have been among the most affected in the world by the pandemic, but large-scale vaccination campaigns have not commenced yet, with limited exceptions.According to the University of Oxford, South American countries have on average dispensed less than two doses of any coronavirus vaccine per 100 people, compared to almost five doses per 100 people in the EU and over 14 doses per 100 people in the US.Russia’s readiness to strike deals has been key in spreading the vaccine across Latin America so far, according to Danil Bochkov, an expert of international relationship at the Russian International Affairs Council.”It is always easier to deal with the state than with a private company, which has to hedge possible risks fearing huge losses. State-owned companies are easier to negotiate with, especially when they are pursuing political goals,” Bochkov told CNN.Valdes, the Argentinian lawmaker, says negotiations with Moscow were easier than with Pfizer, from whom the Argentinian government initially planned to purchase vaccines. “When we looked at the contract, we evaluated that the ones with Pfizer did not comply with the legal protocols we expected,” Valdes said. “We reached out to the Russians and [Argentinian] President Fernandez related directly with Putin, and this sped things up,” he told CNN.Argentina has so far purchased up to 25 million doses of the Sputnik vaccine and dispensed over 600,000 doses. Meanwhile, it is still waiting to dispense the first Pfizer vaccine.In a statement to CNN, Pfizer said the company remains committed to working with the Argentinian government but refused to comment on the status of confidential negotiations.Regional neighbors Peru and Brazil have also cited issues in negotiations with Pfizer, allegedly because of some of the liability clauses it requested, and ultimately turned to other vaccines — Chinese-made Sinopharm in Peru, and Coronavac and AstraZeneca in Brazil. 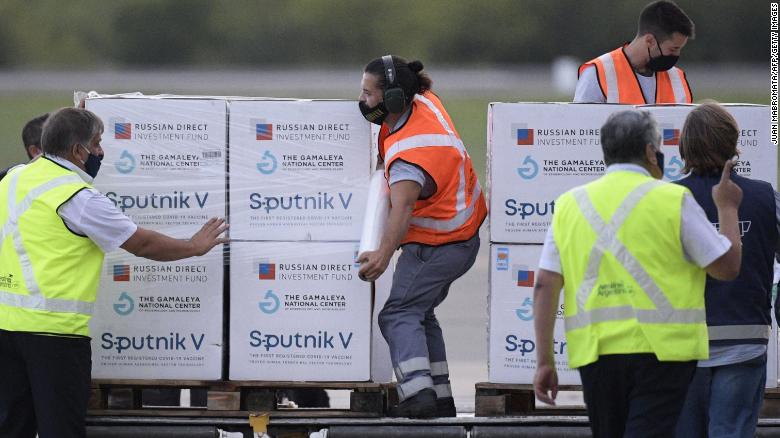 Airport workers unload shipping containers with Sputnik V vaccine doses against COVID-19, at the Ezeiza International Airport in Buenos Aires, on February 12, 2021. Apart from ease of negotiations, two more factors have worked to advantage the spread of Sputnik V through Latin America, according to analysts and lawmakers involved in vaccine purchases in Argentina and Bolivia: Sputnik V is cheap, and relatively easy to store.Even before the negotiations start, the RDIF lists Sputnik V’s price at approximately $10 per doses — roughly half the price of the Pfizer vaccine, which costs $19.50 per dose. Latin American economies have been badly hit by the pandemic, and any possible saving is more than welcome by administrators and politicians.The Russian vaccine can also be stored at a temperature of 2 to 8°C (35 to 45°F) and does not require the ultra-freezing temperature the Pfizer vaccine is stored at. Most of Latin America lacks the infrastructure to maintain ultra-freezing temperatures, especially in rural regions with limited road access.Other privately made vaccines, like those made by AstraZeneca and Moderna, are yet to arrive in large quantities in Latin America, while countries like Brazil, Chile and Mexico have invested in Chinese-made vaccines.Around the world, 26 countries have approved the Sputnik V vaccine.

What Russia stands to gain

Former diplomats and analysts in Buenos Aires, Bogota and La Paz say Russian president Vladimir Putin could now reap benefits from the vaccine’s spread, potentially using it as a global business card to start new and more forgiving relationships.According to Andres Serbin, president of the Regional Coordinator of Social and Economic Research (CRIES), a foreign policy think tank in Buenos Aires, Russia’s interests in Latin America are both political, to rival the United States’ hegemony in the Western hemisphere, and commercial, expanding markets for Russian-owned companies. Selling the vaccine serves both of these objectives.”Russia made a big bet on the vaccine: in the last few years, Russia has re-discovered Latin America, not for ideology but because if your goal is to question the norms and values of the liberal international order, Latin America is a region particularly sensitive to that goal,” Serbin said.Both Russia and China are looking to improve their reputations after years of confrontation with the US and the EU, and the role of vaccine provider for the developing world is a perfect opportunity for a positive PR campaign. As Bochkov puts is, “Russia has mastered the Sputnik V as a diplomatic instrument so far.”Commercially, selling millions of vaccine doses also means turning multi-million dollar profits — something of primary importance for the Russian economy, which has been hit by Western sanctions in recent times.In contrast, the West’s handling of vaccine distribution has often seemed inward-looking. In January, Britain and the EU squabbled over vaccine distribution, while the White House bulked up purchases of vaccines to a total of more than 7 potential doses available for every American, according to data collected by Duke University.”The difference is that the United States are working to get vaccines mostly to vaccinate US citizens. Others like Russia and China are looking to stretch relationships where they can,” Pablo Solon, a former Bolivian ambassador to the United Nations, told CNN.

A missed opportunity for the West?

Western powers could have seized the political — and even moral — advantage, says Amadeo Gandolfo, an Argentinian scholar in political communication at Berlin’s Humboldt University. He argues that Western countries missed a key opportunity to claim a moral victory when they allowed companies to patent their vaccines.”Faced with the absolute necessity for the whole world to obtain the vaccine, leaving it in the hands of the pharmaceutical companies and not allowing a liberalization of the formula, I think it is something that pushed some sectors of Latin America away,” he told CNN.Now, as with any new patented product, the privately developed vaccines are protected by property right and cannot be replicated by other companies or countries. So while private companies like Pfizer and AstraZeneca are struggling to meet committed orders, other laboratories cannot step in to produce the same vaccines and increase supplies.Many Western countries have instead invested in the Covax mechanism, a framework promoted by the World Health Organization to purchase vaccines in bulk and secure deliveries to developing countries that cannot afford to purchase them on their own. But while Covax promises to inoculate up to 20% of the developing world and says it will prioritize four Latin American countries including Bolivia and Colombia for early access, it has yet to deliver a single dose.Whether vaccination efforts would be more equal if Western pharmaceutical companies were not allowed to patent and commercialize the vaccines has been discussed since the beginning of the pandemic. An effort by South Africa and India urging the World Trade Organization to suspend intellectual property rights related to Covid-19 has so far proved unsuccessful.This will cost Western governments dearly in post-pandemic geopolitics, argues Solon, the Bolivian diplomat. “The world has been multipolar for some time,” he told CNN. “But within this multipolar world Russia and China are advancing fast. This vaccine situation is only strengthening the trend.”