But rather than packing her bags or having a last party with school friends, this week she was in New York to be feted by the great and the good of the international development community for her #FreePeriods campaign, which aims to provide free sanitary products to girls in the UK.

She was recognised at the Bill & Melinda Gates Foundation’s Goalkeepers 2018 awards where she was presented with a gong for her campaigning.

“It is the hugest honour,” she said. “It is incredible to see my work and everyone else’s efforts around period poverty being recognised and I really hope it leads to more people being educated and aware of period poverty.” 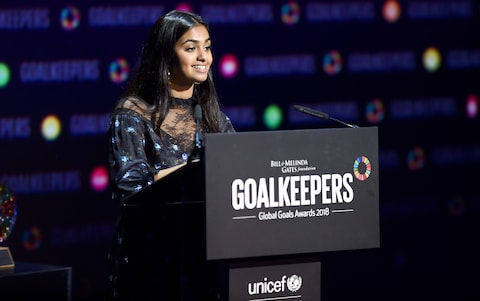 In just 18 months, her pledge to help girls who cannot afford monthly sanitary products has worked its way into political manifestos, encouraged the government to donate £1.5m to the cause, and collected the support of 180,000 people.

Not bad for an 18-year-old from north London who admitted she struggled to even raise the first 20 signatures for her online petition.

It all began when she read news reports about girls in the UK who have to manage their monthly periods without tampons.

“There were girls in the UK missing a week’s school a month, or using whatever they could find – toilet paper, socks, newspaper, T-shirts – just to be able to go to school,” she said.

She was particularly struck by the story of a school in Leeds that contacted a charity, Freedom4Girls, for help. It more usually provides sanitary products to women in Kenya, but stepped in to supply aid packs as a temporary solution.

Girls would go without rather than asking their parents to make a choice between spending the money on food or on tampons, she added.

“People were suffering in silence, nobody was talking about it.”

She was unimpressed with a non-committal answer from the government when the issue was raised in the House of Commons and swung into action with her petition demanding sanitary products for children who received free school meals.

From there she persuaded the Liberal Democrats, the Green Party and the Women’s Equality Party to include a commitment in their election manifestos last year. “It was amazing to have just the word period in three manifestos,” she said with a giggle.

In December she assembled 2,000 protesters dressed in red outside Downing Street. And in March, she was able to claim something of a victory when the government announced it was awarding £1.5m from the tampon tax fund to the charity Brook, for its work addressing period poverty.

It made her one of the stars of awards, held after the Goalkeepers conference, a gathering of activists, entrepreneurs and donors on the fringes of the United Nations general assembly in New York. Ms George’s prize included a public speaking workshop and the chance to network in a room of  tech entrepreneurs, young activists and politicians from all around the world. Speakers included Stephen Fry, the writer and broadcaster, and Emmanuel Macron, president of France.

Mr Curtis, who has worked to promote the 17 abstract goals, said multilateralism and activism were thriving despite, or because of, the American president.

“You can’t expect to enter the world and not find opposition. My observation is that it is in the last couple of years, completely counter-intuitively, the Black Lives Matter and Me Too movement have taken over,” he said. “And what’s their legacy going to be?

“Are we going to look back on the legacy of Trump and say that he was actually the person who lit the fire of an incredibly passionate, effective egalitarian generation.”

Earlier this month Mr Gates unveiled his annual Goalkeepers Data Report, which tracks the greatest challenges faced across the world in terms of poverty and health. The report said that Africa’s projected population boom presented both a challenge and a threat to progress.

But the Goalkeepers event highlighted the potential of young people.

It unveiled three partnerships, or “accelerators”, to bring donors, entrepreneurs and activists together around drives to increase early literacy, eliminate child marriage, and help young people use data to drive progress.

Its global youth poll, released earlier this month, found that young people were more optimistic about their future, the future of their country, and the future of the world than older people.

The conference heard from engineers developing ways to improve measurements of malnutrition around the world, building cheap, affordable scanners to measure soil fertility and from campaigners working to end child marriage.