The search for signs of ancient life on Mars. The first helicopter fly on another planet. The first recordings of sound on the red planet. NASA’s most sophisticated rover to date has a packed agenda for the next few years once it lands on the surface of Mars today. If all goes well — and there is a chance it will not — Perseverance will land around 3:55 p.m. ET. The rover has been traveling through space since launching from Cape Canaveral, Florida, at the end of July. When it reaches Mars, Perseverance will have traveled 292.5 million miles on its journey from Earth.Perseverance is NASA’s first mission that will search for signs of ancient life on another planet to help answer the big question: Was life ever present on Mars? The rover will explore Jezero Crater, the site of an ancient lake that existed 3.9 billion years ago, and search for microfossils in the rocks and soil there.

Along for the ride with Perseverance is an experiment to fly a helicopter, called Ingenuity, on another planet for the first time.Unfortunately, we can’t watch the SUV-size rover land on the surface of Mars — we’re just not there yet, technologically speaking. But NASA is inviting the world to tune in to its countdown and landing commentary, which will stream live beginning on Thursday at 2:15 p.m. ET. Tune in via NASA’s public TV channel, website, app, YouTube, Twitter, Facebook, LinkedIn, Twitch, Daily Motion or THETA.TV. The agency will broadcast live from mission control at the Jet Propulsion Laboratory, where viewers can watch the rover’s team as they share important milestones from landing. They will also share animations of the landing.In a first, the agency will also offer a Spanish language show for the landing. During the landing coverage, NASA’s mission control team will be able to confirm whether the rover safely landed on the surface of Mars. 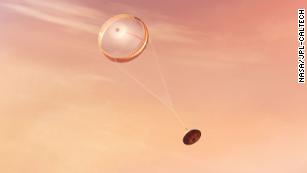 NASA’s Perseverance rover deploys a supersonic parachute before landing, in this artist’s illustration.Naturally, the rover has its own Twitter and Facebookaccounts, where you can expect updates from the mission team from the perspective of the rover. And you can bet the Curiosity rover and InSight lander will be welcoming Perseverance to their home, the red planet. The agency has fun ways to participate in the countdown excitement, like photo booths and activities for kids and students. You can also follow every step of the rover’s landing through a NASA interactive or sign up for a virtual experience of the landing.Explore Jezero Crater, the future home of NASA’s Perseverance rover “If there’s one thing we know, it’s that landing on Mars is never easy,” said Marc Etkind, NASA associate administrator for communications, in a statement. “But as NASA’s fifth Mars rover, Perseverance has an extraordinary engineering pedigree and mission team.”Just weeks after the landing, if all goes according to plan, cameras and microphones on the spacecraft will show the rover’s perspective for the first time. Once the rover has landed on Mars, you can follow its journey using an interactive map. Any raw images sent back by the rover this week and going forward will also be immediately available to the public on NASA’s site.