Mars Mundy’s car broke down shortly after he graduated from law school. And, like many people, he had a frustrating experience with repair shops. Mundy channeled his frustration into building a startup to transform the auto repair industry. He never did practice law. This week Mundy’s startup, CarServ, received $250,000 in funding from Salesforce Ventures.

Mundy was one of eight semifinalists invited to participate in an unusual “elevator pitch” competition sponsored by Salesforce. It’s unusual because it really did take place in an elevator that held a very special passenger.

The Ultimate Elevator Pitch to the 61st Floor. The Salesforce Tower in San Francisco is America’s tallest building west of the Mississippi. It takes 40 seconds to ride an elevator to the 61st floor. On the day of the pitch competition, the elevator doors opened and inside stood Salesforce President and Chief Product Officer, Bret Taylor. The door closed and the elevator started to rise. The entrepreneur had 40 seconds and 61 floors to pitch his idea to Salesforce.

Out of eight entrepreneurs who made their pitch in the elevator that day, three were invited to make a final pitch in front of thousands of people and a panel of judges at Dreamforce 2018. I spoke to each of the three finalists before they took the stage to learn more about their pitch strategy.

Here’s a word-for-word breakdown of Mundy’s winning 40-second pitch. My comments are in parantheses.

“My name is Mars Mundy, the CEO of CarServ, the operating system for auto repair.” (Mundy quickly establishes the big picture, helping his audience mentally categorize the industry his startup plays in.)

“The average car on the road today is twelve years old. Americans spend $314 billion annually on auto repair each year.” (In two sentences, Mundy educates his listener about the market and why it’s so large).

“To drag auto repair out of the dark ages, you have to work from the inside out.” (Here, Mundy offers a metaphor to engage the listener.)

“Over the last four years, we’ve built a team with over 60 years of experience in the auto service industry.” [The quality of the team was one of the criteria Salesforce would use to judge the startups. Mundy highlighted the years of experience his team brings to the table]

“Our Heroku-hosted software is powered by machine learning. With better data around the repair process, CarServ turbocharges speed, accuracy, and customer service.” [Heroku is a Salesforce cloud-application platform. Mundy was smart to include one sentence that connected his service to the company he was pitching. In the final sentence, he revealed how his solution would transform the industry and the customer experience]

Distilling the essence of a complex technology like CarServ into 40 seconds is hard work. Each words counts. Mundy’s pitch was successful because he was able to frame a very large problem, offer a novel solution, and create context for investors who are unfamiliar with the business.

Storyboarding and Rehearsing. Mundy rehearsed his pitch over and over, but none of the finalists took their rehearsal to the extreme that Jenna Flateman Posner did. Posner is the chief revenue officer of Radius8, a startup that uses the salesforce platform to improve the customer experience for retailers with physical locations. Her elevator pitch also earned an opportunity to present on the main stage, where Posner was joined by the company’s CEO, Sandeep Bhanote.

Posner told me that her team began the process of distilling the company narrative into 40 seconds by storyboarding, which you can see in the photograph below. Just as film directors don’t pick up a camera until they sketch each scene of the movie, Posner and the team at Radius8 sketched out the larger narrative. Once they decided on which “scenes” to include, they created a sentence or two to describe each one. 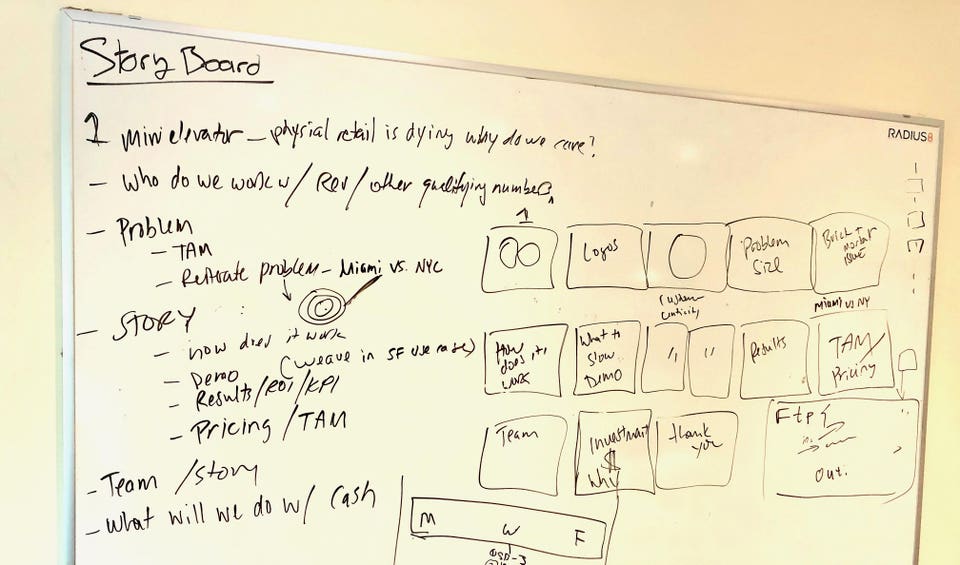 Then, Posner took it to the next level. She convinced a security guard in a high-rise to listen to her pitch in the elevator. Her goal was to eliminate buzzwords and excessive language to focus on the most relevant content. If a security guard could understand the essence of the story, Posner figured she’d have a chance of capturing anyone’s attention. Posner made it to the final three on the big stage.

Zarif Haque, the CEO of DRAIVER, was the third finalist. His startup creates a logistics platform to move cars and trucks for large fleets. Haque knows most investors will be unfamiliar with the problem his company sets out to solve, so he began his pitch with a question that immediately connects his listener to the industry and sets the stage for his solution: “Have you ever had to rent a car or take your car for a service? It’s a pain isn’t it? Think about doing it millions of times a year. Companies like Penske, Budget, and Enterprise have to do it all the time. My company solves that problem with machine learning…”

DRAIVER, Radius8 and CarServ all made it to the finals where they had a little more time, but not much, to pitch their idea. Each company was given 5 minutes to sell their idea to a panel of investors at Dreampitch 2018.

As I watched the final pitches, I realized that the abbreviated elevator pitch had formed the structure they all used to build the 5-minute narrative. Condensing a complex story into 40 seconds is a hard, but valuable exercise. If you want to build a strong elevator pitch, start with a simple narrative that provides context, identifies a problem, and offers a solution that’s relatable to the intended audience. You never know when you’ll be riding in an elevator with your next employee, customer or investor.