Nuriel Chirich Kasbian was a businessman who worked in the high-tech arena in Israel and abroad. But seven years ago, his life changed when he met Dr. Shai Yarkoni and learned about new research on stem cells that the M.D./Ph.D. was conducting in his lab at Tel Aviv Sourasky Medical Center.

“I knew it could change the world,” said Kasbian, who partnered with Yarkoni to found Cellect Biotechnology and commercialize technology that allows for the mass enrichment of stem cells as a raw material and more effective isolation of stem cells from any given tissue, which could improve the effectiveness of a variety of regenerative treatments.

“For regenerative medicine to become available for all people, quality stem cells need to become easily available in mass for all medicinal purposes,” Yarkoni said, noting that stem cells can replace neurons damaged by spinal-cord injury, stroke, Alzheimer’s disease, Parkinss disease or other neurological problems; produce insulin to treat people with diabetes; and as heart muscle cells to repair damage after a heart attack.

Cellect’s ApoGraft platform looks like a blood bag, but inside it there’s a unique protein blend that kills older cells through apoptosis, programmed cell death that occurs in multicellular organisms while the stem cells survive and thrive. This cell-selection process results in an enriched, purified non-toxic batch of stem cells ready for implantation.

It’s groundbreaking, considering that today the most common use of stem cells—bone-marrow transplantation—has only around a 62 percent rate of survival. A bone-marrow transplant involves taking stem cells that are normally found in the bone marrow, filtering those cells and giving them back either to the patient or to another person. Yarkoni explained that this low survival rate is in part because sometimes the donor stem cells that make up a recipient’s new immune system see his or her body’s tissues and organs as something foreign and attack them. The ApoGraft platform helps alleviate this challenge.

Likewise, today’s process for selecting stem cells is done using expensive, complex equipment and can take weeks. The ApoGraft platform takes only two hours, and the stem cells can be administered directly from the medicine bag into the patient by IV. 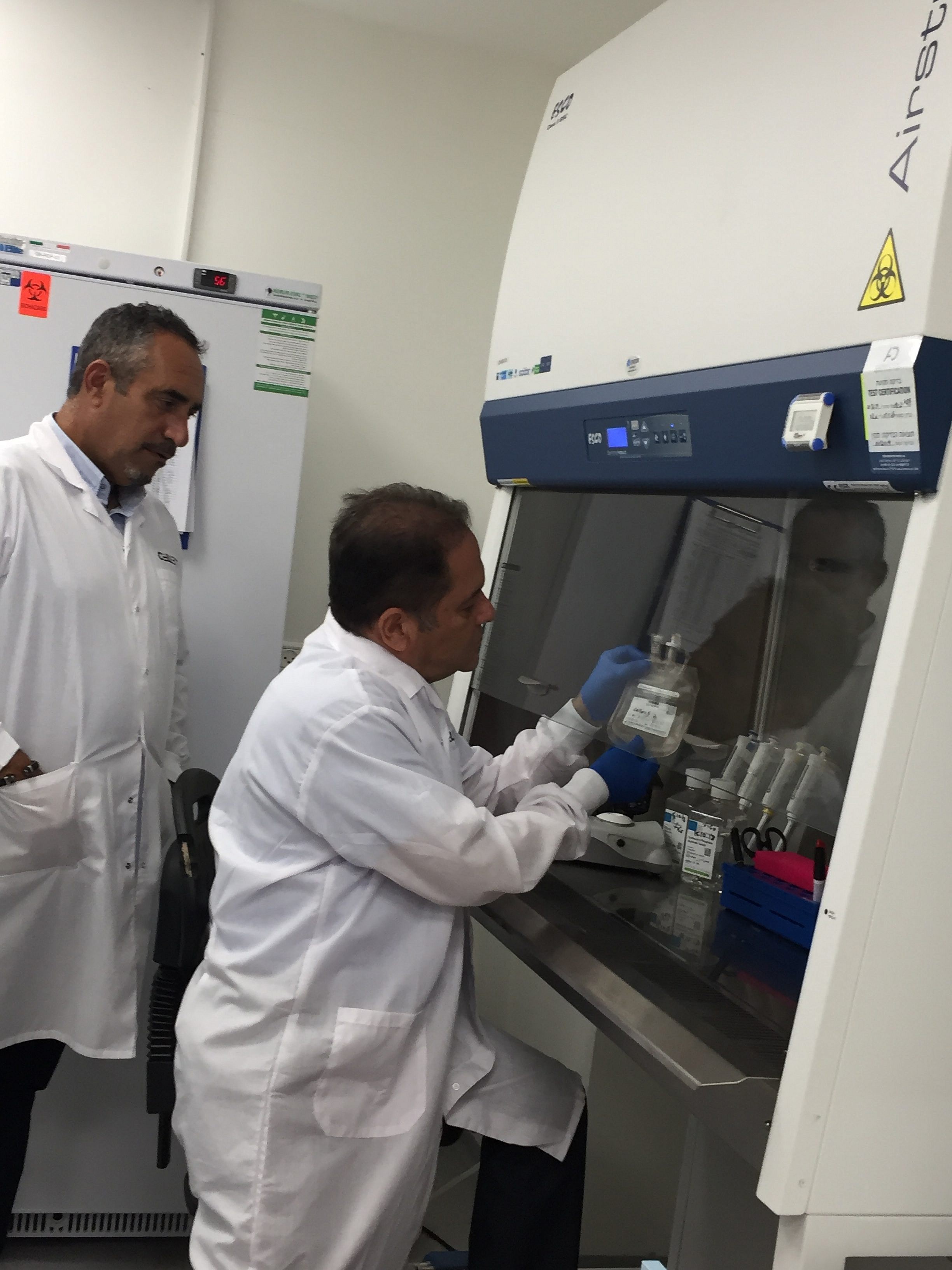 “We don’t lose a single stem cell, and we eliminate all the side effects attributed to non-stem cells,” said Yarkoni. “Some 90 percent of diseases can be treated with stem cells, but right now such treatments costs half-a-million dollars per patient, and the success rate is minimal. We make it effective, non-toxic and affordable.”

So far, Cellect has conducted more than 200 human trials at a 100 percent success rate, including using the ApoGraft platform for transplants at two leading Israeli hospitals.

“Nothing short of a miracle,” said Yarkoni.

“If 50 years ago Jews put their shekels in a blue box to support Israel, today they should put them into companies like Cellect,” said Kasbian. “It makes Israel stronger and the world healthier.”

That is the hope of a new Israeli health network, 8400, which is identifying and closing the gaps in the health-tech (biotech, pharma, digital tech and medical device) ecosystem and transforming the arena into a growth engine for Israel, while accelerating cures for critical international health challenges.

According to 8400’s vice president of programming and marketing, Noa Epstein Tennenhaus, 8400 is building a globally connected network of health-tech ecosystem leaders through a leadership program for senior executives across the Israeli health-care and life-science arena— from academia, business, government, payers, providers and NGOs. The 18-day/eight-month program, which includes a week at Harvard Business School in Cambridge Mass., aims to weave an active network, propel leadership and management across the ecosystem, capture industry gaps and opportunities, and lead to the co-designing of cross-sector disruptive initiatives to accelerate the industry.

“I think there is a huge opportunity,” said Tennenhaus.

She said that Israel has an advantage over other countries because it has been collecting health data via electronic health records for 20 years and has that information stored in an accessible format.

So far, 42 people have completed the 8400 program and another 60 are expected to begin this December. The goal is to have 400 people trained in eight years (hence, the name 8400). The name is also a play on the Israel Defense Forces’ Unit 8200—Israel’s signal intelligence unit credited with training several experts who go on to careers in cybersecurity.

“We are hoping what 8200 did for cyber we can copy and paste to health-tech,” said Tennenhaus.

“The outcome of 8400 will be to position Israel as not only a cyber powerhouse, but a cure and caring nation,” said Murvitz. “We will take the innovation and creativity of the Israeli health-tech ecosystem and direct it into addressing global cure challenges and big-killer diseases. Then we’ll see Israel not just as the innovation nation, but the impact nation.”

The founders of Ra’anana-based MedAware, which utilizes AI and machine learning to significantly reduce medication errors, would agree with this mission. Their technology allows health-care providers, payers and pharmacy chains to leverage big data to identify and eliminate a wide range of prescription errors and provide better risk management.

MedAware CEO and co-founder Dr. Gidi Stein said medication errors account for a $21 billion drain on the American health-care system alone, not including the cost of legal action taken when medication errors occur. Further, adverse drug events (ADEs)—or injuries resulting from taking a medication—are one of the three most common and harmful categories of medical errors. Each year in the United States, approximately 2 million ADEs cause a staggering 100,000 deaths, reports the NGO Patient Safety Movement.

Stein founded MedAware in 2012 after reading about a deadly medication error in Israel, in which a physician prescribed a 9-year-old boy an anticoagulant blood thinner that killed him one week later. The doctor meant to click the medication above the one he prescribed in the electronic prescription service and didn’t notice his mistake until it was too late.

As a computer scientist and physician, he said “I could not live with myself if anything happened like this. So, I set forth to try to solve the problem.”

Earlier this year, Sheba Medical Center’s Internal Medicine Department completed a two-year MedAware trial, which found that 61 percent of prevented errors occurred when a previously safe medication became dangerous to a patient, due to a change in his condition.

Some 39 percent of errors prevented occurred when physicians entered medication orders, and Sheba physicians changed their prescriptions based on MedAware notifications most of the time—10 times more frequently than the current standard of other clinical-decision support tools.

“There is a large volume of medication errors in hospitalization,” acknowledged department head Gadi Segal, who spearheaded the trial. “We don’t really know the extent, but we know that much of it is human error, and that medications are potentially dangerous.”

As such, Segal told JNS that MedAware, “could actually save lives.”

MedAware uses similar AI methods to those used in the finance sector to stop fraud by identifying “outliers” from a trend or practice to recognize suspicious or erroneous transactions. Stein said that when a person owns and uses a credit card, the bank begins to track the individual’s personal spending patterns. When an unordinary transaction is made, the bank is alerted and can contact the owner or put a hold on the credit card.

“We are trying similar methodologies with health-care data,” said Stein. “Prescription patterns of thousands of physicians treating millions of patients are used to determine the ‘normal’ treatment spectrum. A prescription largely deviating from this spectrum is likely to be erroneous.”

MedAware is different than other rule-based medication support technologies that have been developed for a limited range of medication decision support, such as drug-allergy checking, automated dosing guidelines and identifying drug-drug interactions. In contrast, MedAware’s system is fully personalized in that its responses are based on each patient’s specific data. The system is likewise self-learning, with no rule-set that limits the errors it can capture.

Most current systems set off too many false alarms—as many as 95 percent, according to Stein, causing doctors to ignore even relevant alarms. MedAware’s false alert rate is beneath 10 percent.

“It tells you that it would not be advisable to give a certain medication because it does not suit the patient’s profile,” said Segal. “Only machine-learning software that knows the patient’s profile would know to tell me, ‘Hey, doctor, this is a typo, or the wrong medication, or you’re too tired; you cannot give insulin to a patient that doesn’t have diabetes.’ ”

“We are the Startup Nation, and everyone is proud of Israeli innovation,” said Kasbian. “Now, we are going to change the perception of the world of medicine.”